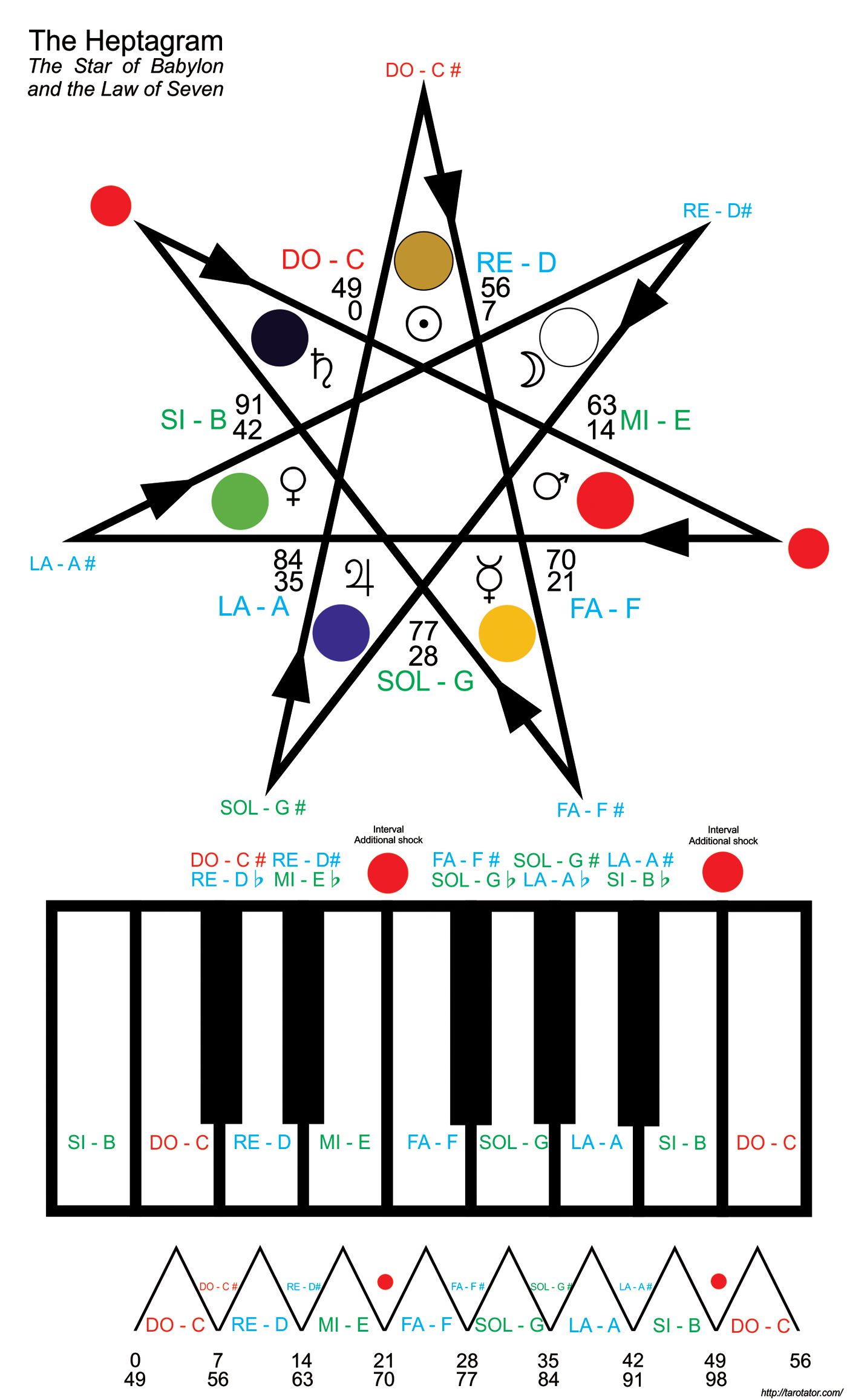 A heptagram, septagram, or septegram is a seven-pointed star drawn with seven straight strokes.
The name heptagram combines a numeral prefix, hepta-, with the Greek suffix -gram. The -gram suffix derives from γραμμῆς (grammēs) meaning a line.
In general, a heptagram is any self-intersecting heptagon (7-sided polygon).
There are two regular heptagrams, labeled as {7/2} and {7/3}, with the second number representing the vertex interval step from a regular heptagon.
This is the smallest star polygon that can be drawn in two forms, as irreducible fractions. The two heptagrams are sometimes called the heptagram (for {7/2}) and the great heptagram (for {7/3}).

In the “Beezlebub’s Tales”, Gurdjieff use the name “legomonism” which represents a form of successive transmission of information from initiates to initiates.
“Legomonism” is the external form of “arts”, such as music, various mysteries, religious ceremonies, family and social customs, religious and popular dances, theatrical spectacles, which may change through the time, but “the impulses they engender in man, and the manifestations that ensue from them, always remain the same”. This way, even if the chain of transmission from initiates to initiates may be broken, remote generations still will have the chance to discover and decode these fragments of knowledge .
He also used another expression “minia-images”, or “models” which also incorporate fragments of those esoteric knowledge into specific symbols and are vehicle of transmission of this encoded information down to distant generations.
But Gurdjieff speaks very explicitly about seven days, seven colours, seven tones, seven vibrations, seven branches of knowledge. Seven and not nine. This clearly refers to a Heptegaram, septagram, septegram or septogram, which is a seven-point star and very unlikely to an Enneagram, which is a nine-point star.
The Heptagram, sometimes – erroneously – referred to as the “Seal of Solomon”, is a well-known and circulated occult symbol. More properly, it should be called “The Star of Babylon”.
According to “The Star of Babylon”, this ancient symbol and diagram, it’s a natural flow, a circuit of energy from the first point and right back to it.
Gurdjieff explicitly has spoken about the division of men into seven categories and “the ray of creation” have also explicitly seven stages . Fundamentally the Enneagram is an alternative depiction of the seven-pointed “Star of Babylon” with the introduction of the additional two shocks.
7 it’s also a very interesting number because it’s made of 3 and 4. Now, according to Gurdjieff the first additional shock occurs after the third note (Mi) and the second after another four notes, respectively after Si.

Turn it upside down, Aleister Crowley has chosen “The Star of Babylon” as symbol for the goddess Babalon – also known as the Scarlet Woman, Great Mother or Mother of Abominations, sacred whore or Whore of Babylon – and name it “Star of Babalon” .

Heinrich Cornelius Agrippa in “Occult Philosophy Book II” has wrote extensively about the characteristics of the number seven.
His ideas were reiterated by W. W. Westcott in “Numbers – Their Occult Power and Mystic Virtues”.
After Birth, the 7th hour decides whether the child will live, in 7 days the cord falls off, in twice 7 days the eyes follow a light, thrice 7 days turns the head, 7 months gets teeth, twice 7 months sits firmly, thrice 7 months begins to talk, after 4 times 7 months walks strongly.
After 7 years, teeth of second set appear.
After 14 years is the arrival of generative power.
After 21 years, the hair of Manhood is completed.
After 28 we cease to grow, at 35 is greatest strength, at
49 is the greatest discretion, and 70 is the natural end of Life.”

Wescott also mentions that according to the oldest Sanskrit occult science of the Upanishads, our physical senses are not 5, but 7. These are: smell, taste, sight, touch, hearing and 6th, Mental perception, with 7th, spiritual understanding.
This is an interesting idea which might be correlated to the 7 types of man denominated by Gurdjieff.
The Seven Principles constituting man are variously named by the Esoteric Buddhism, by the Vedantic scheme, and by other philosophies, but they correspond in the idea. First from above come Atma, a ray from the Absolute; Buddhi, spiritual soul; and Manas, human soul; these are the superior triad, which separates at human death from the lower tetrad of principles.
The lower four are Kama Rupa, The passions; Linga Sarira, The astral body; Prana, Life essence; and Sthula Sarira, The lower body.

There are 3 parts of the Soul, the Intellectual, Irascible and Epithymetic (desiring) and 4 most perfect virtues are produced. Just as of the three intervals, length, breadth, and depth, there are four boundaries in corporeal existence – point, line superficies and solid.

The Seven Wonders of the World are thus enumerated:
1. Pyramids of Egypt.
2. The Hanging Gardens of Babylon, for Semiramis.
3. Tomb of Mausolus, King of Caria, at Halicarnassus, built by Artemisia, his Queen.
4. Temple of Diana at Ephesus, 552 B.C. Ctesiphon was the chief architect.
5. Colossus of Rhodes, an image of the Sun God, Apollo, of brass, 290 B.C.
6. Statue of Zeus, at Athens, by Phidias.
7. Pharos of Egypt, built by Ptolemy Philadelphus, of white marble, 283 B.C.; or the Palace of Cyrus which is sometimes substituted.