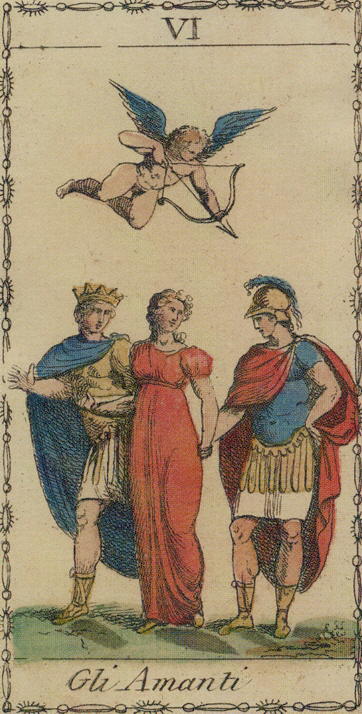 This Ancient Tarot of Lombardy deck is a reproduction of a neoclassical deck published around 1810 in Italy. The original was printed from fine metal engraving plates and hand-colored. The name of the cardmaker F. Gumppenberg is given on the ace of cups (coppe).
Tax stamps of the period can be seen on the ace of swords (spade). The card titles are in Italian, and majors are numbered in Roman numerals except for the Fool and Death cards. Numbers for the minor arcana are given in the upper left and lower right corners. The suit symbols follow the Spanish style in that the indiviudal wands (bastoni) and swords are shown separately on the numbered cards. In an interesting reversal of the norm, the Lovers card shows a woman between two men. This deck is published by Lo Scarabeo of Italy and distributed by Llewellyn in the US.