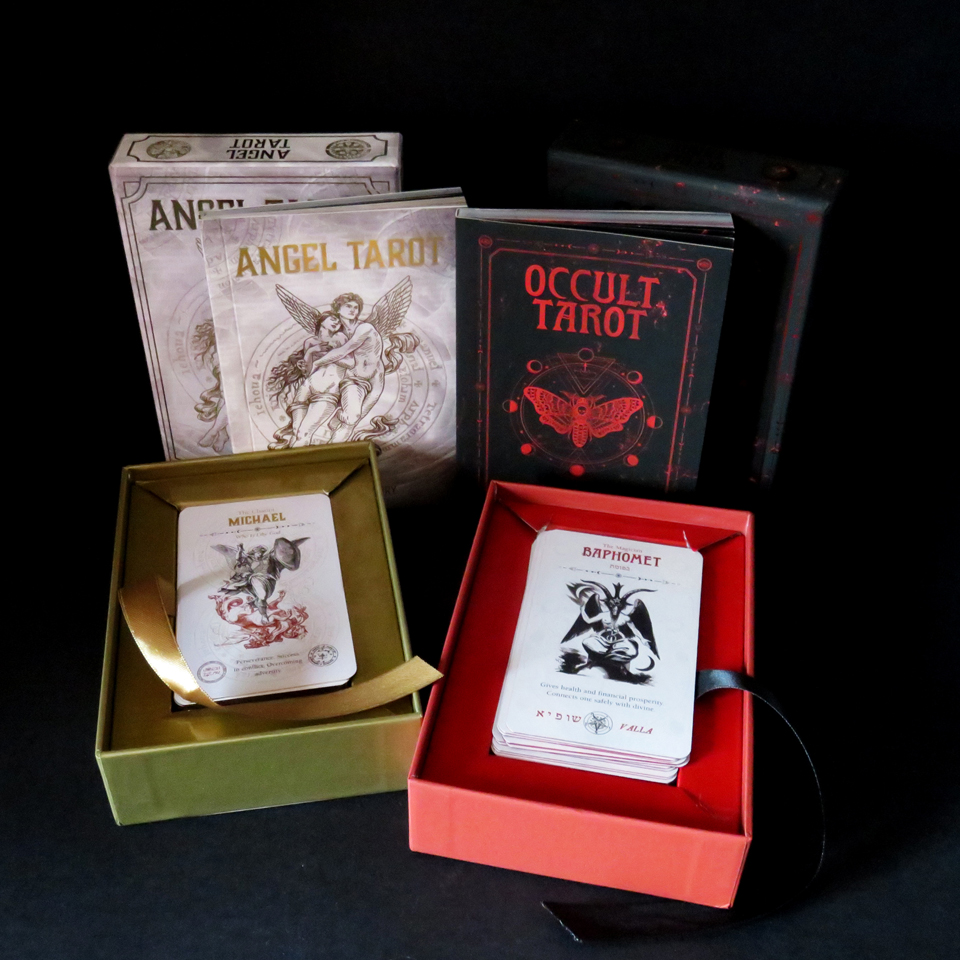 The Angel-Evoking Tarot, respectively the Demon-Possessed Tarot, have been self-published in 2018 following successful Kickstarter campaigns. The Angelic Tarot gathered 1,103, while the Demonic 722 backers. In 2020, the Australian Rockpool Publishing revamped these two decks, and in an all-new presentation, brought them to a new life.
In the Book of Thoth, Aleister Crowley noted, “each card is, in a sense, a living being; and its relations with its neighbours are what one might call diplomatic. It is for the student to build these living stones into his living Temple.”
I always suspected Crowley that his main interest in Tarot was using the cards to conjuring and summoning supernatural entities – spirits which one may call angels or daemons. Truthfully, this is a complex and somewhat controversial topic that should be addressed accordingly. For now, let’s go along with the idea that these are two complementary decks, designed both to work separately or together.

The decks are delivered in beautiful boxes. Inside we have the guidebook and the deck.
The original design of the cards featured “ageing elements” such as wrinkles, rips, discolouration, apparent burn-holes, and even blood stains. Rockpool created a “clean” design that replaced the original “horror feel” with refined elegance. The background colour is white, featuring discrete graphic elements such as Magick circles. The cards of the Angel Tarot has gold, while the Occult Tarot has red gilded edges. They look great, but from my experience, shuffling can be difficult and may produce damaging the edges and the cards. If I wear to chose between aesthetics and practical efficiency, definitively I would vote for durability.
On the other hand, I love the matte finish. It is a – horrible – trend currently to have glossy varnish, which is not only “shinny blinding” but wears off quickly, ripping off the printing as well and destroying the cards, most of the time at the very first shuffling. Thanks to Gabriel and Beelzebub, it is not the case!
The guidebooks also look great – their content, however, is less satisfying. The major shortcoming is the lack of Tarot related information. In the booklet of the Occult Tarot, the only reference is “resonates with the X (card) in the traditional Tarot.” On seventy-eight pages, we have the full-size pictures of each card, featuring one more time the demon’s abilities – it is a beautiful waste of precious space. Adding the Tarot interpretation of the cards would have been quite handy.
I would be keen to know a whole lot more about the correspondence system created by Travis McHenry, as it is different from the one originated by the Golden Dawn, used by Crowley and other occultists and Tarot creators such as Lon Milo Duquette. The booklet of the original edition has a complete table of correspondence, while the Rockpool edition, unfortunately, left this vital information off.
Can these decks be used as “regular” Tarot decks for divination? Theoretically, yes, practically is not that simple. Without that table of correspondences and further information regarding the meaning of the Tarot cards, only advanced Tarot readers may traditionally use these decks.
Still, it can be a powerful instrument of Ceremonial Magick – handled with care!
On the other hand, they are beautiful collectables, wonderful additions to any respectable collection. Just be careful and don’t buy counterfeited editions! If you find these decks on AliExpress/Alibaba/Wish/Geek or any other website selling cheap knockoffs, they’re most likely fake copies. If you see them for less than the list price, $24-$29, they are probably fake copies. Don’t support the piracy! You deserve better!

Travis McHenry somewhat reminds me of Michael Aquino. A snippet of occultism, military background, religious experiments, corporate success, mystery, Magick and the American dream all wrapped up and served accordingly. If you are new to this, Mr Aquino was a member of Anton LaVey’s Church of Satan and a military intelligence officer who specialised in psychological warfare. After leaving LaVey’s movement, he went on to found the Temple of Set.
Mr McHenry studied the dark arts and various religions, served as an intelligence specialist in the United States Navy, worked as a recruiter in the corporate world, and created several Magickal decks of cards, including The Oracle of Heaven and Hell, Tarot of Vlad Dracula, The Hieronymus Bosch Tarot, and The Devil’s Own, respectively An Angel’s Own Playing Cards. The Vlad Dracula Tarot, featuring drawings by Russian artist Nikita Vuimin, has also been republished by Rockpool Publishing. CEO, author and adventurer, occultist and podcast host, filmmaker, actor and musician, Travis McHenry is a colourful character of many diverse interests.