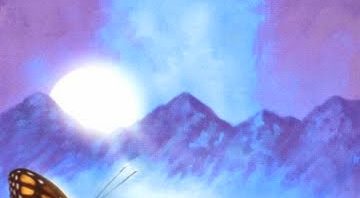 The Silver Witchcraft Tarot merges tarot with modern pagan symbolism and magickal understanding. Illustrated in deep, atmospheric colour, it has a multicultural cast of robed characters set in glorious nature-based scenes. The 78 borderless cards are enhanced by silver metallic edges, and there’s also a companion book by Barbara Moore.
The Silver Witchcraft Tarot aims to bridge a gap between traditional Rider-Waite-Smith (RWS) tarot imagery and the world of “magical spiritual understanding”. This is a deck that is visually stripped down to the very basics of tarot imagery, and shorn of all but the most fundamental RWS symbolism. It has a strong emphasis on colour-coding – greens, blues, purples, and browns dominate this deck – although there is no guide as to what the exact significance of these colours is. Presumably you assign meaning for yourself.