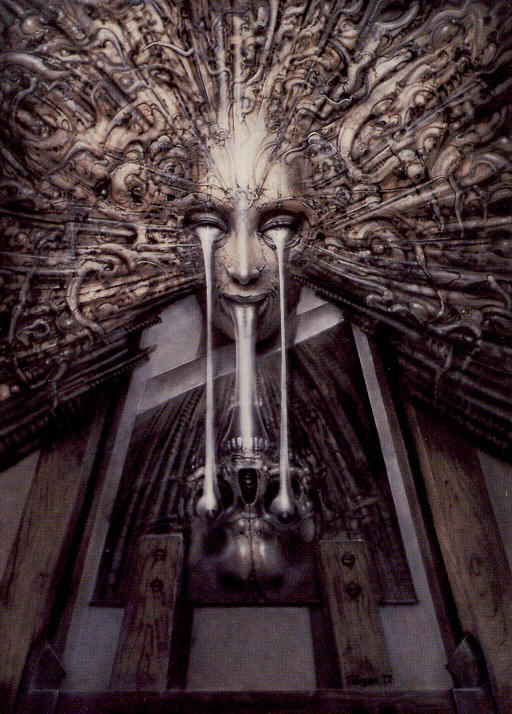 The set is Taschen’s reworking of Giger & Akron’s Baphomet Tarot der Unterwelt set from 1994, and I recall this being one of the last things Taschen created with Giger after spending the previous decade producing a run of books, diaries and posters featuring his paintings. Inside a box you find a set of 22 oversize Tarot trumps presenting some of Giger’s works against metallic silver surrounds.
There’s also a poster-size sheet for card readings printed with his pentagram design, and a 224-page paperback book by Swiss Tarot scholar Akron, aka CF Frey, which interprets the paintings as they relate to the Major Arcana. (The Baphomet set had a hardback book and the pentagram design printed on the back of each card.)
If you’re familiar with Tarot symbolism you don’t have to use these cards to find the correspondences intriguing. The trump ordering is an odd mix of the Crowley scheme with the more traditional designations. Two of the trumps have also been given new names: The Hanged Man is now The Hanged Woman while Crowley’s Art (formerly Temperance) has become Alchemy, an association which works since the card in the Crowley deck depicts the Androgyne of alchemical symbolism. I can imagine some Tarot collectors finding these cards far too dark and nasty, but when so many Tarot designs today are various degrees of garish or twee there’s plenty of room for a Giger or two to harsh the New Age mellow.
The card set has been out of print for years but Abebooks still carries copies at reasonable prices.

Hans Rudolf “Ruedi” Giger (5 February 1940 – 12 May 2014) was a Swiss surrealist painter, sculptor and set designer. He was part of the special effects team that won an Academy Award for Best Achievement in Visual Effects for their design work on the film Alien. He was named to the Science Fiction and Fantasy Hall of Fame in 2013.
He studied Architecture and industrial design at the School of Applied Arts until 1970.
Giger broke through when H.H. Kunz, co-owner of Switzerland’s first poster publishing company, printed and distributed Giger’s first posters.
Giger’s style and thematic execution were influential. His design for the Alien was inspired by his painting Necronom IV and earned him an Oscar in 1980. His books of paintings, particularly Necronomicon and Necronomicon II (1985) and the frequent appearance of his art in Omni magazine continued his rise to international prominence. Giger is also well known for artwork on several music recording albums including ELP’s Brain Salad Surgery and Deborah Harry’s KooKoo.
In 1998 Giger acquired the Château St. Germain in Gruyères, Switzerland, and it now houses the H.R. Giger Museum, a permanent repository of his work.