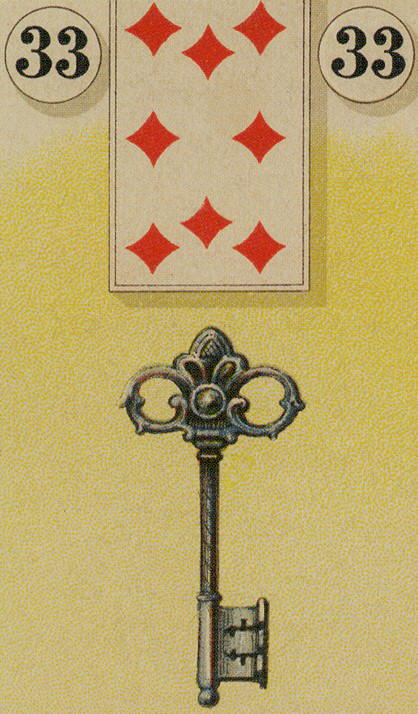 Marie Anne Adelaide Lenormand (1772–1843) aka Mlle Lenormand, was a French professional fortune-teller of considerable fame during the Napoleonic era. In France Lenormand is considered the greatest cartomancer of all time, highly influential on the wave of French cartomancy that began in the late 18th century.
Lenormand was born on 27 May 1772 in Alençon, Normandy, to Jean Louis Antoine Lenormand, a draper, and Marie Anne Lenormand (née Gilbert). Lenormand was orphaned at the age of five and educated in a convent school. Lenormand left Alençon for Paris in 1786.
She claimed to have given cartomantic advice to many famous persons, among them leaders of the French revolution (Marat, Robespierre and St-Just), Empress Josephine and Tsar Alexander I. She was active for more than 40 years.
In 1814 Lenormand started a second literary career and published many texts, causing many public controversies. She was imprisoned more than once, though never for very long.
Lenormand died in Paris on 25 June 1843 and is buried in Division 3 of Père Lachaise Cemetery. She left behind a fortune of 500,000 Francs, and left no heirs other than a nephew who, at the time of her death, was in the army. A devout Catholic, her nephew burned all of Mme. Lenormand’s Occult paraphernalia; taking only the monetary fortune that she left behind.

The original prototype for the Lenormand deck, das Spiel der Hoffnung (Game of Hope), was designed as a board race game with a secondary use of fortune telling by a German man Johann Kaspar Hechtel (1771-1799). The deck was later named after the famous French fortune-teller Marie Anne Adelaide Lenormand (1772-1843).
The board game used a traditional Southern German playing card deck of 36 cards with new illustrations on each card that were laid out in a 6×6 formation, a typical formation for gambling board games similar to Mexican Lotería now known in Germany as Bilderlotto (picture lotto). (Southern German playing card decks historically did away with the aces and the 3/4/5 pip cards in each suit leaving only 36 cards, the two/deuce/Daus corresponds to the French ace and is ranked highest in the playing card deck.) The Anchor, traditionally a symbol of hope, was the second last card and the winning square for the player who reached it first.
For the fortune telling purpose, the instructions were to lay out the cards in an 8×4+4 formation we know as the Grand Tableau (big picture) today. The 8×4 part was based on a Grand Tableau formation using a 32 card piquet deck. The original game instructions preserved in the British Museum do not contain explicit divination meanings for each card.
The original cards included both German and French suits (hearts, bells/diamonds, acorns/clubs and leaves/spades), but the cartomantic meanings of the cards correspond to traditional German cartomancy systems not the French ones that are more well-known in the English-speaking world. Acorns/clubs were traditionally associated with the servant class and poverty in Germany, which explains why it is the least favourable suit. (Source: lenormanddictionary.blogspot.com)

Each card have several different meanings and they are interpretation depends on the question ask, the neighboring cards, the type of the spreed and the reader’s own insight.
The astrological assignments are quite odd and the interpretation of the cards differ from the traditional French cards reading, but Mlle Lenormand created her own functional method and system.
Her are the cards, their attributions and general meaning.

0 comments on “The Lenormand cards”

3 Pings/Trackbacks for "The Lenormand cards"