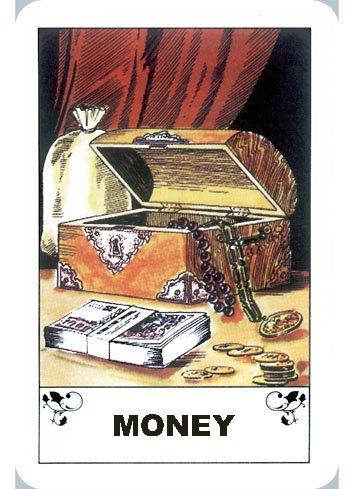 The origin of the modern Gypsy fortune telling cards are the Sibilla cards. About the classic Sibilla cards, there is unfortunately very little historical information.
The term Sibilla was derived from the ancient word Sibyl, which means as much as prophet, seer, oracle. The first mentions a sibyl go on Plato’s works, back in the 4th centurie before Christ.
In classicism, the Sibilla term was resumed and printed in the form of divination cards, which reflecs situations and feelings.
It is believed that the Sibilla cards were also used by the Mlle Lenormand. The French artist Grandville created under the patronage of the French publisher Grimaud the Sibilla cards ‘Sibylle des Salons’ that were first published in 1840.

They were the first known Sibilla cards.
In 1850 is was also Grimaud who reduced this version of divination cards to 32 cards and he published the new deck with the title ” Le Livre du Destin”.
The symbolism was slightly modified in these cards and in the upper left corner were playing cards symbols.

Approx. 1870, when the original version of Grimaud revised again and the work ” Le petit Cartomancièn ” was created.
This kind of Sibilla cards had 36 cards, the symbolism was almost retained and the arrangement of playing cards symbols has been completely taken over .
These works were often copied by other European card printing companies and printed in a similar form .
The most popular edition of German Sibilla cards is a deck wich appeared around 1870 by Conrad Jegel entitled ” Sibille , the fortune telling gypsy mother.”
Almost all other versions of Sibilla cards are based on the original version of Grimaud .