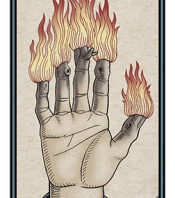 Robert M Place is the designer of The Alchemical Tarot, The Alchemical Tarot Renewed, The Tarot of the Sevenfold Mystery, The Facsimile Italian Renaissance Woodcut Tarocchi, The Tarot of the Saints, The Buddha Tarot, The Vampire Tarot, and The Angels Tarot. He is the author of the books that accompany most of these decks. He has also authored The Tarot: History, Symbolism, and Divination, which Booklist has said, “may be the best book ever written on that deck of cards decorated with mysterious images called the tarot.” He is the author of Astrology and Divination, Magic and Alchemy, and Shamanism, written for the Mysteries, Legends, and Unexplained Phenomena series, and the author of Alchemy and the Tarot. He is the curator of The Fools’ Journey and the author of the catalog for this exhibition of Tarot art that originated at the LA Craft and Folk Art Museum in 2010. He was the guest of honor at the opening of the Tarot Museum in Riola, Italy in 2007. His Facsimile Tarocchi is included in the collection of the Metropolitan Museum of Art.
A wonderful deck and book set that I highly recommend. Robert Place’s cards not only show the alchemical process but faithfully adapt the style and iconography of Renaissance alchemical illustration to the process of individuation as described by Carl Jung. Much of the book is an excellent overview of the history, principles, and practice of alchemy, and should not be skipped. Bob and Rosemary describe the personal experiences and synchronicities that led to the publishing of their magnum opus; nothing about it seemed accidental, and we can share in their sense of awe and wonder at the processes involved. Both have delved deeply into Tarot’s real history, reaching back before the Egyptian and Kabbalistic fantasies of the 18th and 19th centuries to the earlier Classical, neo-Platonic, and Pythagorean-inspired icons and emblems that characterize the 15th to 17th centuries. The art consists of delicate line drawings resembling etchings with great clarity of detail, exquisitely colored.