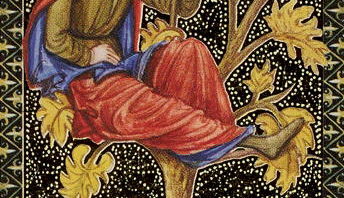 The Golden Tarot of the Renaissance is based on the fifteenth-century French deck, the Charles VI (also known as the Estensi) of which only 17 cards remain. Lo Scarabeo’s full set of 78 cards have been created in attractive watercolours and finished with a gold leaf background.

“This is a fragmentary hand-painted tarot deck in the Bibliotheque Nationale in Paris, which possesses all the trumps other than the Swindler, the Papesse, the Empress, the Wheel, the Devil and the Star card.
The Estensi Tarot is often erroneously referred to as either the Charles VI or Gringonneur tarot. The reason for this misnomer is that an entry, dated 1392, was found in the account books of King Charles VI, stating that he had paid a sum of money to an artist by the name of Jacquemin Gringonneur, for several sets of playing cards.” classicaltarot.com