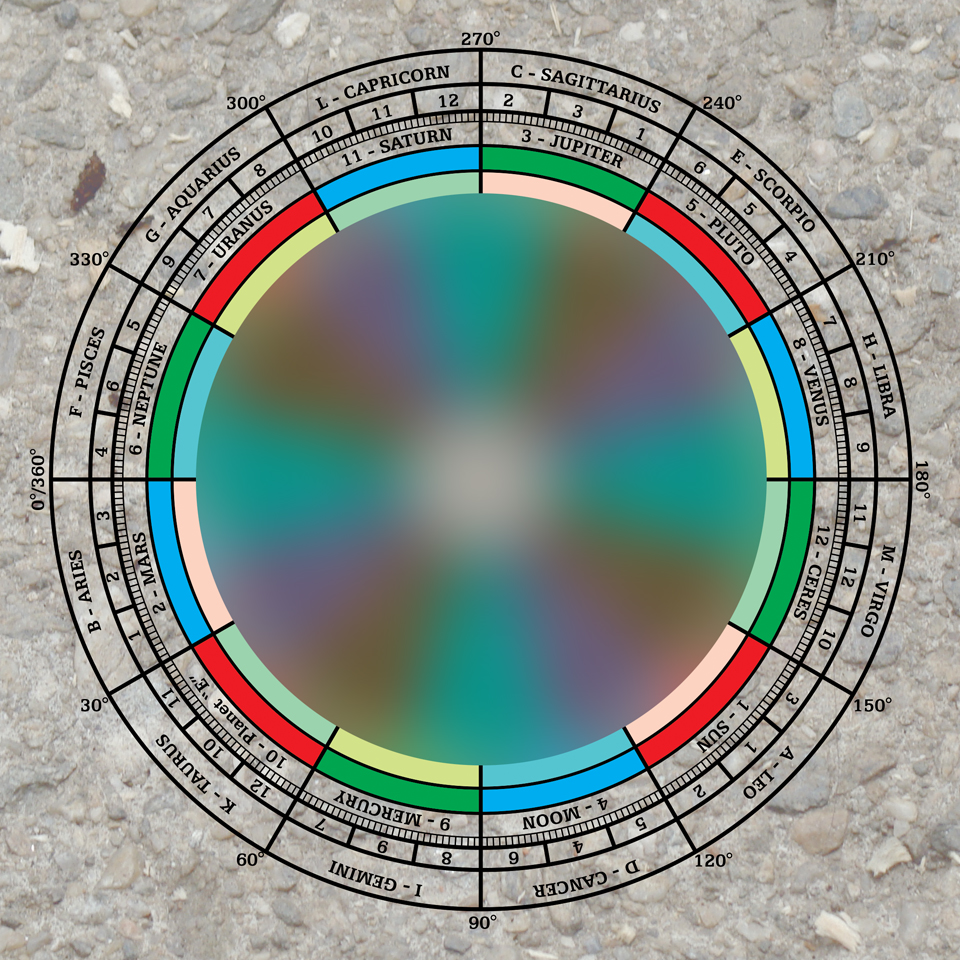 I was oscillating between the titles, the “Kárpáthy system” or the “revisited Kárpáthy system”. Eventually, I have decided to go with the simple “Kárpáthy system”. First of all, my previous method was called the “Unified Esoteric Tarot”, and secondly, I did not use the “Kárpáthy” name previously.
The significant difference between the two systems lies within the ruling attributions of the decans.
Short recapitulations. The astrological attribution of the Pips, or as I prefer to call them, the Numerals, is based on the so-called Chaldean system.
The Chaldean system is an arbitrary distribution of the seven classical planets following a repeating pattern. Begin with the first decan of Aries, the ruling planets are Mars, Sun, Venus, Mercury, Moon, Saturn and Jupiter. One of the outstanding shortcomings of the system is that Mars is ruling over the third decan of Pisces and the first decan of Aries.
The modern astrological alternative to the Chaldean system is called Triplicity.
In theTriplicity method, the nature of signs, respectively, the planets are taking into consideration.
The fiery signs, Leo, Sagittarius and Aries, are ruled by Sun, Jupiter and Mars.
The watery signs, Cancer, Scorpio and Pisces, are ruled by Moon, Pluto and Neptune.
The airly signs, Gemini, Libra and Aquarius, are ruled by Mercury, Venus and Uranus.
The earthly signs, Taurus, Virgo and Capricorn, are ruled by Venus, Mercury and Saturn.
The distribution throughout the thirty-six decans is straightforward. The ruling planet of the sign is attributed to the first decan.
For example, Leo’s first decan is ruled by the Sun.
The second decan of Leo is ruled by the governing planet of the following fiery sign, which is Jupiter.
The third decan of Leo is ruled by the governing planet of the next fiery sign, which is Mars.
The major shortcoming of the system is that Mercury and Venus are considered both airly and earthly planets, each one of them ruling both airly and earthy signs. Mercury is associated both with Gemini and Virgo, while Venus with Taurus and Libra.
In my opinion, a functional twelve signs system necessarily requires twelve planets.
As a sign or planet cannot be both masculine, feminine or androgynous, similarly, they cannot be of different natures as well. Respectively, they are fiery, watery, airly or earthly, but cannot be of two different natures.
That brought me to the so-called God Formula: three by four makes twelve (Read more about it here: https://www.patreon.com/posts/51241887). Three Qualities – or genders – and four Elemental natures.
Without getting into all the explanations and details, Mercury has been attributed to Gemini, Venus to Libra, Ceres to Virgo and the symbolic planet “E” to Taurus.
The Unified Esoteric Tarot used Triplicity instead of the traditional Chaldean system.
Far as I know, previously, no other Tarot deck made this leap. One small step for me, a giant leap for humanity.
However, something was unsettling with the system.
Comparing the meaning of the cards considering their astrological attributions with the definition provided by Etteilla more than two hundred years earlier, they do not match.
More importantly, I never was satisfied by the attribution of Mars to the first decan of Aries. It never felt suitable. This “detail” made me think and search further.
The Two of Wands, according to Etteilla, signifies melancholy and “mortification”, meaning that transcended into the interpretation of Mathers, Waite and Crowley. The Two of Wands was depicted by Pamela Colman Smith in a pretty Hamletian manner: “To be or not to be, that is the question,” posture which does not resonate with the vulcanic nature associated with Mars in Aries.
Eventually, the solution, the key to this issue, came from the past.