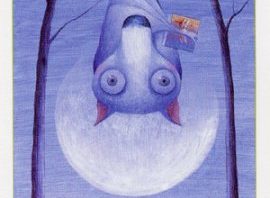 The Tarot of the Magical Forest is a bizarre journey through a world of strange-but-cute animals and characters in eye-catching Rider-Waite based illustrations. First published in Taiwan by Taiwanese artist Leo Tang, it’s also been re-published by Lo Scarabeo with their standard borders.
On first inspection, this deck is definitely a Rider-Waite-Smith (RWS) clone that cleverly replaces the human element with stylized animal creatures. The deck is a standard compliment of 78 cards with 22 Majors and 56 illustrated Minors. The cards measure 2.5” x 4.75” which makes them a little narrower than standard size and easy for small hands to shuffle. The card stock and coating appear standard and sturdy enough to withstand shuffling without being stiff or overly slick.
The illustrations are surrounded by an unobtrusive plain white border with light gold filigree on the bottom. Under the filigree, each card is numbered and titled in both English and Chinese, following the convention of the RWS.