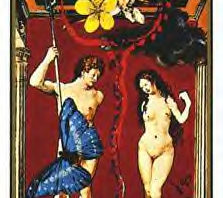 This deck was created by Dali in the mid 1970s when he was 70 years of age and he was the first well-known artist to produce a set of Tarot cards. Each image depicts a mysterious, irrational and dream-like scene with enigmatic emblems, such as butterflies, crutches and silhouettes. Some images have been inspired by famous places and by distinguished European artworks throughout history. Several are original works by Dali.
The 22 Major Arcana provide unorthodox correspondence for Hebrew letters and astrological signs. Each Major Arcanum card is titled in both English and Spanish, for example ‘Los Enamorados’ for the Lovers and ‘El Loco’ for the Fool. 0 The Fool is positioned at the end of the Major Arcana and the Court Cards describe Queen, King, Knight and Page. The suits are represented by Wands, Cups, Swords and Coins as Pentacles.
The Magician (El Mago) has been chosen to illustrate the deck on the front cover of the book. Described as the card of ‘Personal Magic’, the energy is real magic which is not limited to trickery, sleight of hand, hocus-pocus or stage illusions. With this magic, we transcend the normal and become one with ourselves, with God and the world. It shows Dali himself in the central position as the Magus; in front of him are many of the tools of his trade and some of his most well-known works, such as the melting clock which represents elasticity and uniqueness of our own personal view and experience of time. The scroll symbolises the making of plans and the designing of our own life path. The scene is reminiscent of Leonardo’s ‘The Last Supper’ with Dali in the position of Jesus with the bread and wine on the table, representing our participation in the divine act of creation. The arches are those of Sainte Chappelle, Paris, the pillars of which denote aspects of the personality which need to complement each other and unite to serve a higher purpose. The card interpretation states: We see Dali, but we realise that this card is really about you and me and our own individual talents and qualities. Flames lick around the central character, these are the fires of the creation and transmutation and the life-force which is within us. We are instructed by this card to make the most of our imagination, creativity and communication skills and to do something extraordinary and unique. (thetarotreview.com)