Skip to content Skip to main menu
Home › Alchemy › Yes, No, and Maybe type of questions 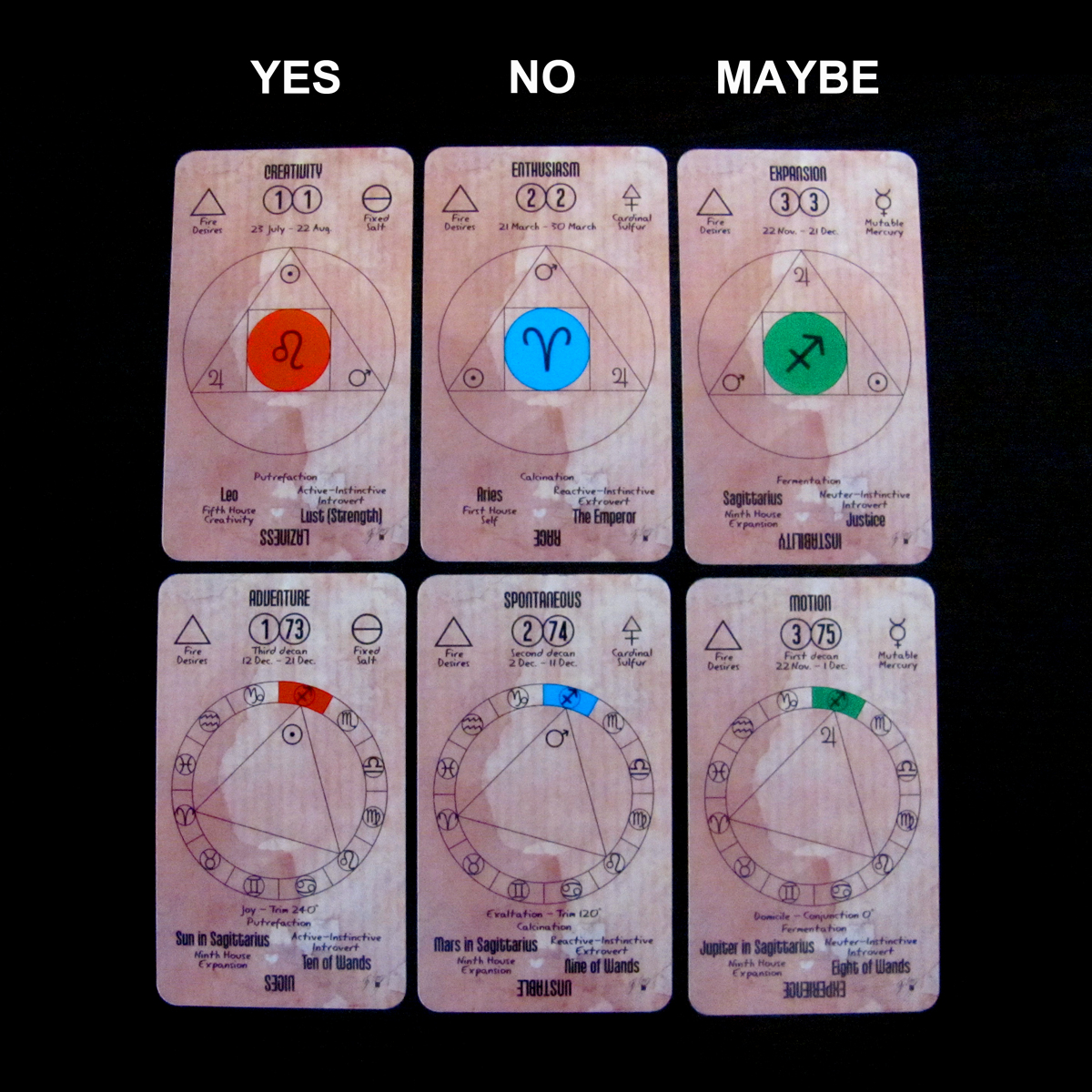 I don’t recommend the use of the ‘Yes or No’ type of questions because I have my reserves regarding the accuracy of the answers to these questions. That doesn’t mean, it is not possible to use the Tarot cards for this purpose.
There are several, so-called ‘traditional’ methods of ‘Yes or No’ readings.
Probably the most popular is the one in which a card in straight position means ‘yes’; while a reversed card means ‘no’.
Not too many people know and are aware of the fact that the three basic universal energies, respectively active, passive and neuter are directly related to this matter.
First of all, there are always three and not two type of options: yes, no, and maybe. These express the trin nature of the universe. For instance, space is tridimensional. In Kabbalah, the Tree of Life has three pillars. In Astrology, there are three Qualities: Fixed, Cardinal and Double (or Mutable). In Alchemy there are the so-called “Three Essentials”, respectively Salt, Sulphur and Mercury, and so on.
These three aspects are one of the fundamental features of the Unified Esoteric Tarot deck.
The deck is double colour coded. The background colour represents one of the four Elements, while on each card there is a detail intensely coloured red, blue or green. These three colours represent the three basic universal energies.
Red is for active, which may be considered ‘yes’; blue is for passive – although, I prefer reactive instead -, which is for ‘no’; and green is for neuter (or reconciling), which is for ‘maybe’.
This simple colour scheme makes it very easy to read the Unified Esoteric Tarot deck. What it’s even more exciting, you don’t have to memorize anything because everything is on the cards. And what is even better, you will learn it easily, without any headache by working with the deck. Not at least, everything is simple and make sense.
Those who have basic knowledge of Astrology, know that the three Qualities applies to the Zodiac signs. Considerably fewer people know and aware that each Zodiac sign is subsequently divided into three decades and each decan also represents one of the three Qualities.
Let’s take a look at the Fire signs first. Leo is Fixed, Aries is Cardinal, and Sagittarius is Mutable.
Now let’s take a look at the three decades of Sagittarius.
The first decan is Mutable, the second is Cardinal, and the third is Fixed. It’s not the same in each Zodiac sign, but you don’t have to memorize that because just as I said, it’s on the cards, both, written and colour coded.
How to use it?
When you have a ‘yes or no’ type of question, I recommend to include the third option as well: maybe. Then you can draw one single card and see which Quality the card represent. Only the four Aces represent all the three Qualities because they each represent one season and each season includes three Zodiac signs representing each one of the Qualities.
Another possible method is to consider the Quality of the card which represents the future or the outcome.
Finally, you may also calculate which Quality is dominant in the spread and consider it a further clue.

I hope it was helpful. My best regards,