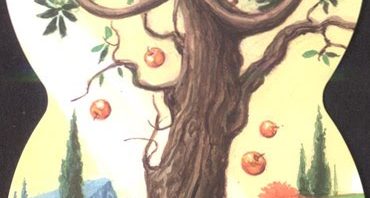 I originally thought that this deck was going to be a really kitchy deck and something or a novelty that I would have in my collection but never use. Which is why I am enjoying the new way I am conducting reviews. I am forced to spend more time with each deck. I used the Infinity Tarot for Oracle Wednesday this week as well as daily draws with the cards.
After spending a week reading and getting to know the Infinity Tarot I am still on the fence. I know that is not super helpful but it is true.
I found the imagery very easy to connect with and there is a lot of movement in the cards which makes total sense because they are shaped like the infinity symbol you almost want to go with the symbol in the card. It flows nicely.
The cardstock is okay, it is standard Lo Scarabeo card stock. The shape I think is either going to turn some people WAY off this deck or really engage others. I am engaged by it.
The keepsake box is lovely and very sturdy. There is silver embellishments around it and a William Blake quote on the side. It is a lovely box for sure. The cards and booklet come out easy.
The Booklet is very basic. Each language has 10 pages. There is one Tarot Spread at the beginning of the booklet and then descriptions for each of the cards.
There are no titles or writing of any kind on any of the cards. Which makes it easier for people whose first language isn’t english. The Court cards have crowned symbols and the Major arcana cards which are usually titled in a Tarot deck just have the numbers at the top and bottom of each card. This may turn some people off and may make this deck a little harder to access for beginner students. (ethony.com)