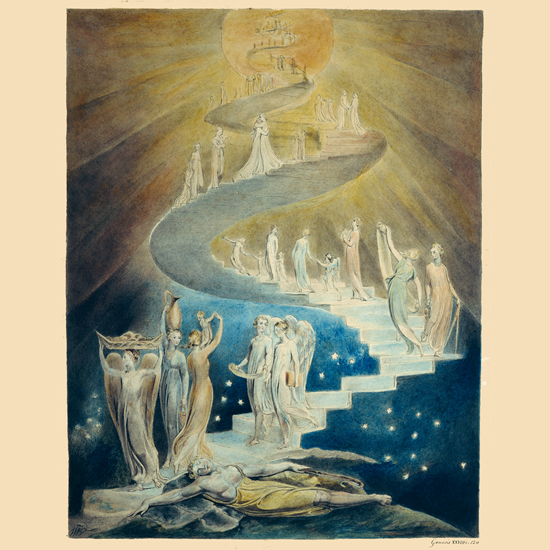 Jacob’s Dream at Bethel is one of the strangest episodes of Genesis. Bethel means house of G_d. Son of Isaac and Rebecca, and the grandson of Abraham, Jacob is regarded as a patriarch of the Israelites. Jacob had twelve sons, all of whom became the heads of their own family groups, later known as the Twelve Tribes of Israel.
G_d have chosen to communicate with Jacob, but instead of speaking to him directly as he previously did with Abraham, he has chosen to appear in his dream. Further puzzling is the dream itself. Instead of transmitting a clear message, Jacob had an allegorical dream, which requires decrypting and may result in various interpretations. Thus, Jacob’s dream is an excellent opportunity to explore different paths of analysing and interpreting a dream.

“Jacob left Beersheba and set out for Harran. When he reached a certain place, he stopped for the night because the sun had set. Taking one of the stones there, Jacob put it under his head and lay down to sleep. He had a dream in which he saw a stairway resting on the earth, with its top reaching to heaven, and the angels of G_d were ascending and descending on it. There above it stood the Lord, and he said: I am the Lord, the G_d of your father Abraham and the G_d of Isaac. I will give you and your descendants the land on which you are lying. Your descendants will be like the dust of the earth, and you will spread out to the west and to the east, to the north and to the south. All people on earth will be blessed through you and your offspring. I am with you and will watch over you wherever you go, and I will bring you back to this land. I will not leave you until I have done what I have promised you.
When Jacob awoke from his sleep, he thought, Surely the Lord is in this place, and I was not aware of it. He was afraid and said, “How awesome is this place! This is none other than the house of G_d; this is the gate of heaven.
Early the next morning, Jacob took the stone he had placed under his head and set it up as a pillar and poured oil on top of it. He called that place Bethel, though the city used to be called Luz.
Then Jacob made a vow, saying, If G_d will be with me and will watch over me on this journey I am taking and will give me food to eat and clothes to wear so that I return safely to my father’s household, then the Lord will be my G_d, and this stone that I have set up as a pillar will be G_d’s house, and of all that you give me I will give you a tenth.” (Genesis 28:10-22)

Why had Jacob dreamt of a ladder with angels ascending and descending?
The simplest explanation of the dream states that the ladder with the ascending and descending angels symbolise life with its ups and downs. And Jacob’s life was, at least we can say, tumultuous. Jacob died at the age of 147. According to the biblical account, he was the second-born of Isaac’s children, the elder being Jacob’s fraternal twin brother, Esau. Jacob bought Esau’s birthright for a bowl of stew and, with the support of his mother, deceived his ageing father to bless him instead of Esau. He had twelve sons through four women. Allegedly, Jacob displayed favouritism among his wives and children, preferring Rachel and her sons, Joseph and Benjamin. His action caused tension within the family, culminating in Joseph’s older brothers selling him into slavery in Egypt.
According to the Midrash Genesis Rabbah, the ladder signified (…)…

Read the full text and gain access to more exclusive materials at https://www.patreon.com/attilakarpathy