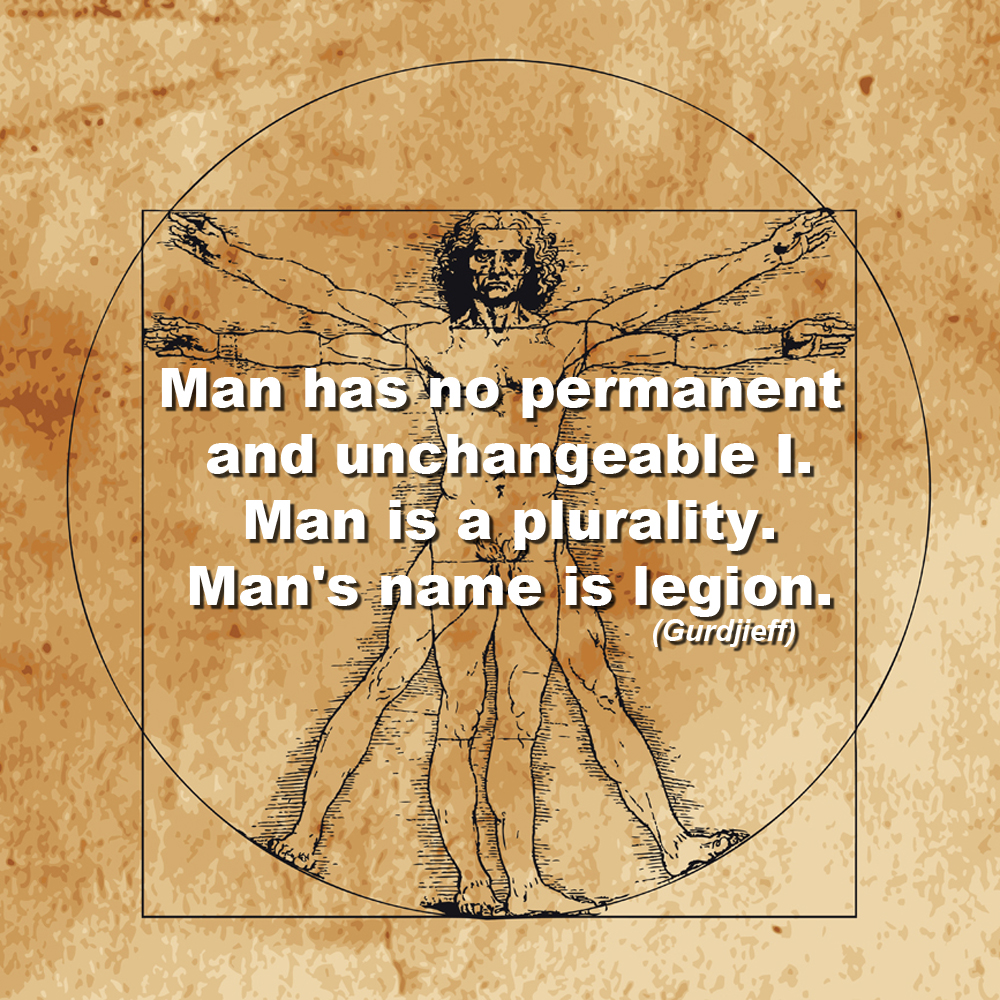 “Man such as we know him, the ‘man-machine,’ the man who cannot ‘do,’ and with whom and through whom everything ‘happens,’ cannot have a permanent and single I. His I changes as quickly as his thoughts, feelings, and moods, and he makes a profound mistake in considering himself always one and the same person; in reality he is always a different person, not the one he was a moment ago.
Man has no permanent and unchangeable I. Every thought, every mood, every desire, every sensation, says ‘I.’ And in each case it seems to be taken for granted that this I belongs to the Whole, to the whole man, and that a thought, a desire, or an aversion is expressed by this Whole. In actual fact there is no foundation whatever for this assumption. Man’s every thought and desire appears and lives quite separately and independently of the Whole. And the Whole never expresses itself, for the simple reason that it exists, as such, only physically as a thing, and in the abstract as a concept. Man has no individual I. But there are, instead, hundreds and thousands of separate small I’s, very often entirely unknown to one another, never coming into
contact, or, on the contrary, hostile to each other, mutually exclusive and incompatible. Each minute, each moment, man is saying or thinking ‘I.’ And each time his I is different. Just now it was a thought, now it is a desire, now a sensation, now another thought, and so on, endlessly. Man is a plurality. Man’s name is legion.” (Gurdjieff)

Interestingly, “Legion” is a group of demons referred to in the New Testament, in an incident in which Jesus performs an exorcism.
The earliest version of this story exists in the Gospel of Mark, described as taking place in “the country of the Gerasenes”. Jesus encounters a possessed man, and calls on the demon to emerge, demanding to know its name – an important element of traditional exorcism practice. He finds the man is possessed by a multitude of demons, who give the collective name of “Legion”. Fearing he will drive them out of the world and into the abyss, they beg him instead to send them into a herd of pigs, which he does. The pigs then rush into the Lake and are drowned. (Mark 5:1–13)

1 They went across the lake to the region of the Gerasenes. 2 When Jesus got out of the boat, a man with an impure spirit came from the tombs to meet him. 3 This man lived in the tombs, and no one could bind him anymore, not even with a chain. 4 For he had often been chained hand and foot, but he tore the chains apart and broke the irons on his feet. No one was strong enough to subdue him. 5 Night and day among the tombs and in the hills he would cry out and cut himself with stones.
6 When he saw Jesus from a distance, he ran and fell on his knees in front of him. 7 He shouted at the top of his voice, “What do you want with me, Jesus, Son of the Most High God? In God’s name don’t torture me!” 8 For Jesus had said to him, “Come out of this man, you impure spirit!”
9 Then Jesus asked him, “What is your name?”
“My name is Legion,” he replied, “for we are many.” 10 And he begged Jesus again and again not to send them out of the area.
11 A large herd of pigs was feeding on the nearby hillside. 12 The demons begged Jesus, “Send us among the pigs; allow us to go into them.” 13 He gave them permission, and the impure spirits came out and went into the pigs. The herd, about two thousand in number, rushed down the steep bank into the lake and were drowned. (Mark 5:1–13)

This story is repeated in the other Synoptic Gospels. The Gospel of Luke shortens it but retains most of the details. (Luke 8:26–33) The Gospel of Matthew shortens it more dramatically, changes the possessed man to two men (a particular stylistic device of this writer) and changes the location to “the country of the Gadarenes”. This is probably because the author was aware that Gerasa is actually around 50 km away from the Sea of Galilee (although Gadara is still 10 km distant). In this version, the demons are unnamed. (Matthew 8:28–32) (Source: Wikipedia)

28 When He had come to the other side, to the country of the Gergesenes, there met Him two demon-possessed men, coming out of the tombs, exceedingly fierce, so that no one could pass that way. 29 And suddenly they cried out, saying, “What have we to do with You, Jesus, You Son of God? Have You come here to torment us before the time?”
30 Now a good way off from them there was a herd of many swine feeding. 31 So the demons begged Him, saying, “If You cast us out, permit us to go away into the herd of swine.”
32 And He said to them, “Go.” So when they had come out, they went into the herd of swine. And suddenly the whole herd of swine ran violently down the steep place into the sea, and perished in the water. (Matthew 8:28–32)

Man have to face her/his own demons and get rid of them. Those demons are thoughts, desires and attachments. Multiple, temporary I’s.
As a consequence, exorcism is a process of spiritual cleansing.
If a man can get rid of all those I’s, then he will find himself and the one and only God inside.