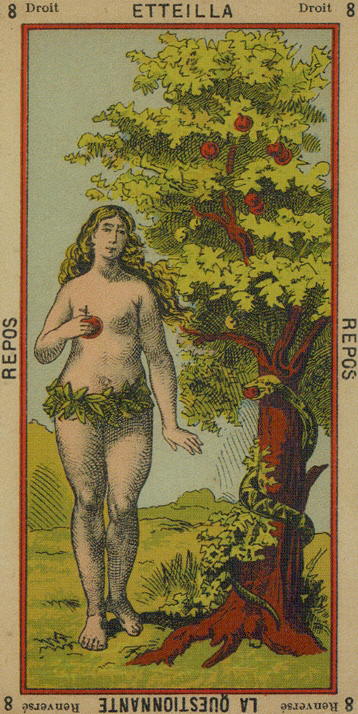 “Etteilla” is the pseudonym of Jean-Baptiste Alliette (1738 – 12 December 1791). Etteilla is simply the reverse of his surname. He was the French occultist who was the first to popularise tarot divination to a wide audience back in 1785, and therefore the first professional tarot occultist known to history who made his living by card divination.
Aside from the birth certificate recording his birth in Paris in 1738, very little is known about Jean-Baptiste Alliette’s youth. His father was a maître rôtisseur, a caterer, and his mother was a seed merchant. He married Jeanne Vattier in 1763, a marriage that lasted half a decade, during which he worked as a seed merchant, before publishing his first book, Etteilla, ou manière de se récréer avec un jeu de cartes (“Etteilla, or a Way to Entertain Yourself With a Deck of Cards”) in 1770.
Etteilla, ou manière de se récréer avec un jeu de cartes was a discourse on the usage of regular playing cards (the piquet deck, a shortened deck of 32 cards used in gaming, with the addition of an “Etteilla” card). Features included the “spread”, or disposition on the table, and strictly assigned meanings to each card both in regular and in reversed positions, characteristics that are still central to tarot divination today. In his preface, “Etteilla” explained that he had learned his system from an Italian; it remains unclear to what extent his assigned symbology was his own contribution. The book was reprinted the following year. He was working as a printseller, but from this time, approximately, he earned his livelihood by working as a consultant, teacher and author.
In 1781 the French Swiss Protestant clergyman and occultist Antoine Court who named himself Court de Gébelin published in his massive work Le Monde primitif his idea that the Tarot was actually an ancient Egyptian book of arcane wisdom. There is no evidence to support the notion that tarot has an Egyptian lineage, but in the stir that followed, Etteilla responded with another book, Manière de se récréer avec le jeu de cartes nommées Tarots (“How to Entertain Yourself With the Deck of Cards Called Tarot”) in 1785. It was the first book of methods of divination by Tarot. In it Etteilla claimed that he had been introduced into the art of cartomancy in 1751, long before the appearance of Court de Gebelin’s work.
In 1788 he formed ‘Société des Interprètes du Livre de Thot’, a group of French-speaking correspondents through which he continued to disseminate his teachings.
By 1790, he was interpreting the hermetic wisdom of the Egyptian Book of Thoth: Cour théorique et pratique du Livre du Thot, that included his reworkings of what would later be called the “Major” and “Minor Arcana”, as well as the introduction of the four elements and astrology. Towards the end of his life Etteilla produced a special deck for divination that syncretized his ideas with older forms of French cartomancy, the first deck of cards specifically designed for occult purposes.
This is a very interesting and quite different deck then most of the other known Tarot decks of its time. Etteilla it’s the first known Tarot reader and author who correlated the Tarot cards with Astrology – although he did it only with the cards of the Coins suite.