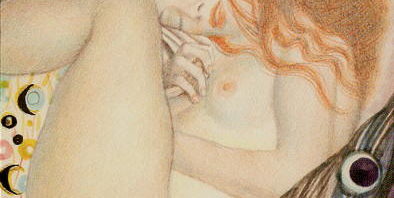 Gustav Klimt (July 14, 1862 – February 6, 1918) was an Austrian symbolist painter and one of the most prominent members of the Vienna Secession movement. Klimt is noted for his paintings, murals, sketches, and other objets d’art. Klimt’s primary subject was the female body; his works are marked by a frank eroticism.
Klimt’s ‘Golden Phase’ was marked by positive critical reaction and financial success. Many of his paintings from this period include gold leaf. Klimt had previously used gold in his Pallas Athene (1898) and Judith I (1901), although the works most popularly associated with this period are the Portrait of Adele Bloch-Bauer I (1907) and The Kiss (1907–08).
Klimt travelled little, but trips to Venice and Ravenna, both famous for their beautiful mosaics, most likely inspired his gold technique and his Byzantine imagery. In 1904, he collaborated with other artists on the lavish Palais Stoclet, the home of a wealthy Belgian industrialist that was one of the grandest monuments of the Art Nouveau age. Klimt’s contributions to the dining room, including both Fulfillment and Expectation, were some of his finest decorative works, and as he publicly stated, “probably the ultimate stage of my development of ornament.”
In 1905, Klimt created a painted portrait of Margarete Wittgenstein, Ludwig Wittgenstein’s sister, on the occasion of her marriage. Then, between 1907 and 1909, Klimt painted five canvases of society women wrapped in fur. His apparent love of costume is expressed in the many photographs of Flöge modeling clothing he had designed.
A.A. Atanassov was inspired by Gustav Klimt’s style and created the cards for the Golden Tarot of Klimt from artwork spanning the artist’s career from 1899 to 1917. Some cards are close copies of his original paintings -The Moon card is a version of ‘Danae’, the Ten of Cups is ‘Jungfrau’, Strength is ‘Judith II’ and the High Priestess in ‘Bildnis Frieda Reidler’ – while others are of a similar feel but don’t directly match with a piece of Klimt’s.
The card art is rich and luxurious yet elegant and poised, offset by dramatic black borders.