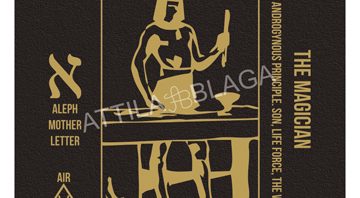 Divination:
The Air, Water and Fire attributed to the Tarot card according to the kabbalistic scheme, should not be confused with the Four Elements. These are the Three Primes or Tria Prima mentioned by Paracelsus.
According to alchemists, Mercury, Salt and Sulphur are the three-fold aspects of all phenomena to be found in all compounds of a mineral or organic nature.
Mercury represents the Spirit, Salt the Body; and Sulphur the Soul. Philosophically speaking, Mercury is the Mind; Salt is the Will, and Sulphur is Love. The three are the components of the Philosopher’s Stone.
Mercury, the First Matter, represents the intellectual principle, and it is the coordinating factor of both Sulphur and Salt.
According to Paul Case, Mercury, or Hermes, was the messenger of the gods. Mercury as principle represents that aspect of the Life-power which has been termed super-consciousness and it is associated with The Magician.