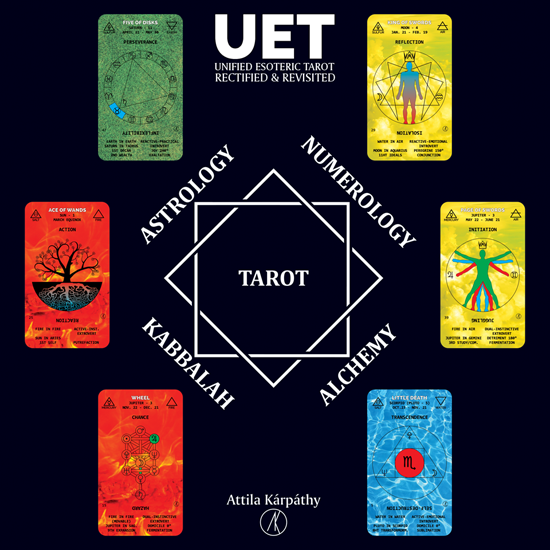 After almost three decades of Tarot practice, research and comprehensive study, in 2018, I created and self-published the Unified Esoteric Tarot deck.
The Unified Esoteric Tarot offers a unique method of learning Tarot, Astrology, Numerology, Alchemy and Kabbalah concomitantly and painlessly in a coherent, groundbreaking system while facilitating intuitive and rapid readings.
Each card features keywords, timing, and attributes, including Astrology, Numerology, and Alchemy.
The simple and appealing design helps to discern between the various group of cards at first sight.
The double-colour coded design also facilitates fast and articulated interpretation.

The first limited edition, 78 decks only, was sold through a crowdfunding campaign. A Second Limited Edition of 78 decks has been printed and sold, just like the 78 copies only, Special Black Edition. The deck won the distinction of CARTA Awards for Best Self-published Tarot deck of 2018.

There has been a growing interest in this deck, especially after all the available options have been sold out. I never intended to publish another edition. Yet, I further developed the original concept and made several minor adjustments. It only proves that this is a living deck. Combined with the intensified interest in the deck, I decided to publish a rectified and revisited Third Edition.
While the basic concept and graphic elements remain unaltered, the overall look and feel of the deck have been improved. The background panels have been redesigned, and the information is better disposed of and arranged. The new featured fonts are much easier readable. The four-sided, printed mini-booklet has been extended to 8-sided and improved. As much as I opposed publishing a new edition, as much I love the result.

The UET is a planetary system. Its esoteric architecture is based on the 3 x 4 = 12 formula. The 3 fundamental energies by the four basic elements.

This planetary pattern is running through the entire deck, except for 8 cards: 23, 24, 25,26, 27, 28, 29, and 30.
The first 12 cards represent the Zodiac signs.
The following 10 cards represent 10 planets.
Then comes the irregularity of the Aces and Kings, the cards from 23 to 30.
Both Aces and Kings are representing transitions from one level or dimension to another.
After that, the pattern continues through the 12 Court Cards and the 36 Numerals.

Alchemically, there are 4 stages of development divided into 12 steps.
Nigredo constitute of Putrefaction, Calcination and Fermentation.
Albedo consists of Conjunction, Sublimation and Projection.
Citrinitas constitute of Multiplication, Cibation and Separation.
Rubedo consists of Solution/Dissolution, Exaltation and Crystallization.

I am still considering how this deck will be made available.
Also, a printed guidebook will be also published in a short time – one way or another. Stay tuned!