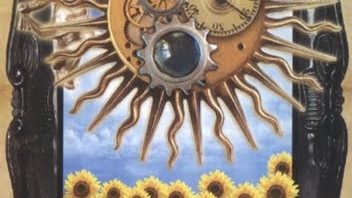 The Victorian Steampunk Tarot is certainly likely to appeal to steampunk aficionados. The artwork combines clockwork and mechanical devices with Victorian imagery in settings that include iconic English landmarks and symbols.
The Empress, for example, shows Queen Victoria on a Penny Black stamp against a golden field with an elm tree in the skyline, behind The Emperor you can make out the Crystal Palace while Judgment shows monuments from London’s Magnificent Seven cemeteries. The minor arcana suits are dragonflies, moths, bees and butterflies – reflecting the Victorian obsession with collecting specimens from the natural world, but still associated with the usual tarot elements of water, fire, air and earth respectively.
In the book that comes with the boxed set, creator Liz Dean says that for the major arcana her “inspiration comes from the spiritualist movement that began in the UK and USA in the 1840s, at the beginning of Victoria’s reign along with the Rider Waite and Visconti-Sforza tarot symbolism.” One of the suggested two-card layouts is inspired by a method spiritualists used to get messages from the spirits. (badwitch.co.uk)