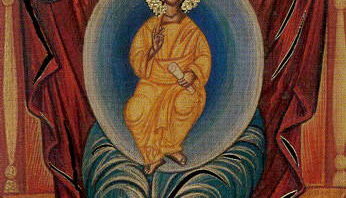 A luxurious looking tarot based on the iconic art of Russian Orthodox Christianity. The Golden Tarot of the Tsar is one of Lo Scarabeo’s metallic decks – the saints and biblical scenes have textured gold backgrounds.
Despite the aristocratic title, this is not a deck devoted to the Russian Tsars, but a deck with its basis in the images of the faith of Russian Orthodox Christianity. The veneration of religious images – icons – is a very old tradition, brought to Russia from Byzantium in the earliest days of Christianity, when its worship replaced that of pagan divinities and ancestral spirits. The ritual use and doctrine of icons were codified and defined in the 9th Century CE, and the artistic code established at the same time set out the rules of iconography. The prescribed pattern, composition and distinct characteristics have changed little since that time., as icons were not intended to be a product of the artist’s imagination, or to depict exactly an image of physical reality, but to represent a spiritual ideal and assist contemplative prayer. They illustrate the life of Jesus, Mary, the Saints, and biblical stories and are not meant to appeal to our aesthetic sense, but to be holy.