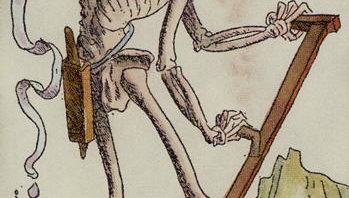 The Tarot of the Master is a recoloured reprint of a Italian tarot deck first published in 1893. The Italian titles are not translated but each card has an individual keyword printed unobtrusively on the face.
The Tarot of the Master is a re-coloured re-release of a northern Italian tarot, the ‘I Naibi di Giovanni Vachetta’ (The Naibi of Giovanni Vachetta). It was first published in 1893 in Turin, home in the present to the Lo Scarabeo publishing house.
Vachetta’s artistic style is a mix of medieval and late nineteenth century (some cards are reminiscent of the Victoria Regina Tarot in poses and objects). His original art was coloured in harsh and bright primary and secondary shades, but the modern deck has instead been printed in a delicate, soft palette of greens, greys, pale blues and pinks to emphasise the delicacy of Vachetta’s illustrations.