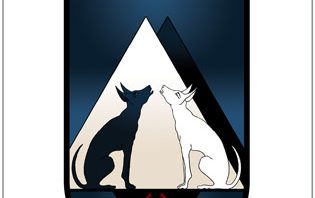 There are a couple of different so-called Egyptian Tarot decks, although no actual Egyptian Tarot deck was ever found. This one it’s very beautiful, I love that Navy Blue, make it very classy and elegant.
Studying the 22 cards I found some interesting and intriguing associations, Astrological assignments.
I only suspect that the artist had no clue about Tarot and Astrology, but I’m quite curious how they explain their choices.

I saw them on gnosticteachings.org as illustration for Samael Aun Weor’s book „Alchemy and Kabbalah in the Tarot”, an interesting book you can reed it there online.

The most ancient sciences in the world are Alchemy and Kabbalah, which are the practical, spiritual knowledge hidden in the depths of every great religion and mystical tradition.
Modern scientists are only recently discovering what these ancient teachings have always known: that we are a part of a multidimensional universe, and that our consciousness, our awareness, can expand to perceive matter and energy that are invisible to the flesh.
Just as physics and chemistry illuminate our understanding of the physical world, Alchemy and Kabbalah constitute a scientific method to awaken the consciousness and fully develop the human being, opening the doors to vast worlds that are hidden from the physical senses.
This awakening or alchemical birth requires a precise scientific method, for everything that exists depends upon causes and conditions. Hidden in centuries of mystical texts and obscure drawings are the specific instructions that lead towards the opening of their inner senses and the entrance into a higher life. The Philosopher’s Stone, the secret of transmuting lead into gold, and many other sacred mysteries long restricted to initiates who had proven their trustworthiness were publicly revealed for the first time by the author Samael Aun Weor.

P.S. Digging deeper, I discovered that this could be the Eternal Tarot deck published by Glorian Publishing in 2015. Available now, direct from the publisher, and shipping worldwide for $14.95.