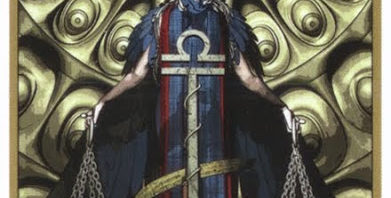 Fabio Listrani’s Night Sun Tarot is one of those decks I couldn’t wait to get my little hands on. I would consider this an esoteric tarot deck. On the Majors, you have the astrological, elemental, and Hebrew letter correspondences in the card corners. In the Minors, you have the elementals and decanates.
I usually have to hand-write these onto my working decks, but here on the Night Sun, the work is done for you, and done beautifully.
There is a strong Modern Age comic book art style to the Night Sun Tarot, with digitally rendered illustrations. Fabio Listrani, the brainchild behind this exquisite deck, is an Italian artist and graphic designer whose work tends toward the science fiction/fantasy genres of art. He seamlessly blends Eastern and Western esoteric symbolism and cultural references, and updates esoteric tarot for the 21st century with this very original, insightful, and groundbreaking new deck.
In the Majors, you’ll see clear influence from the Rider-Waite-Smith, but also the Thoth, and even farther back to the Continental or European traditions pre-dating the English esoteric decks (for example, you see that Marseille influence in Key 6: The Lovers). Here in the Night Sun, Key 8 is Justice, corresponding with Libra, and Key 11 is Strength, corresponding with Leo. The planetary, zodiacal, and elemental correspondences in the Majors and Minors follow Golden Dawn attributions. (benebellwen.com)