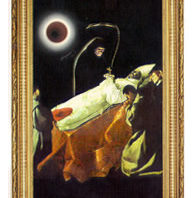 The Sacred Art Tarot takes religious and classical artwork and iconography, and cut-and-pastes extra tarot symbolism to link it with the traditional Rider-Waite imagery. Each of the 78 illustrations is surrounded with a gilt frame border. Kind of nice for real painting, but pretty kitschy for some Tarot cards.
The Sacred Art Tarot takes religious artwork from the Middle Ages, the Renaissance, and the pre-Raphaelites, and adds extra tarot symbolism to make a 78-card deck in the Rider-Waite tradition.
The deck was four years in the making, but sadly overall it falls flat for me. Some of the cards work as complete tarot images, but in many more the juxtaposition of the classical paintings and the added computer-generated tarot elements is jarring – they distract from and even clash with the great original art rather than enhance it.