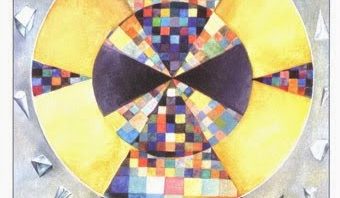 The Japaridze Tarot is a fine art tarot of 78 cards with original artwork by Parisian contemporary artist, Nino Japaridze. Her tarot artwork is bold and evocative, exploring tarot symbolism through collage-style surrealistic paintings. Published in a deluxe set by US Games, and with a full-colour 176-page companion book.
Japaridze Tarot, a re-imagining of the Tarot universe through the visionary lens of Franco-Georgian artist Nino Japaridze, is a series of seventy eight original paintings in oil, acrylic, gouache, ink, and collage created over a period of two years.
Steve Lucas, owner of New York’s Gallery of Surrealism which represents Japaridze, proposed to the artist in 2011 that she create twenty two works inspired by the Major Arcana of traditional Tarot. As the works neared completion, they came to the attention of legendary Tarot authority and collector Stuart Kaplan. Kaplan, author of the four-volume Encyclopedia of Tarot and whose company, U.S. Games Systems, is the world’s foremost publisher of Tarot decks, was fascinated by Japaridze’s images and determined to publish them under his imprint. He challenged the artist to create an additional fifty six paintings constituting a complete tarot deck. The artist was intrigued and created the remainder of the deck over the following year.