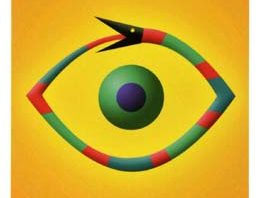 This deck was produced by Crystal Love and Michael Hobbs, using primarily astrological and numerological symbolism. It is a very modern themed deck, which veers away sharply from traditional symbolism. Design is stark and simplistic, using computer generated artwork.
This deck would be completely useless as a starter deck. You would already have to be pretty experienced with tarot in order to be able to read it. And though my knowledge of astrology is pretty patchy, I’m not convinced that the astrological attributions would necessarily help too much. I can see the perfect logic of assigning the card the Moon to the zodiacal correspondence of Cancer…..but I can’t make sense of why the Universe or World as it is in this deck is attributed to the Sun.
The pip cards are repetitive arrangements of symbols, and the Suits are named for the Elements – Air, Fire, Water and Earth, with air attributed to Swords, and Fire to Batons or Wands – which will please some people who have been debating this over on the forums recently!.
The Air pips are represented by spheres containing clouds, and an overall blue colour scheme.. Fire pips are indicated by stylised yellow flowers on a red glowing background. Starfish are the pips of choice for Water on a strong green background which reminded me more of Earth than Water. But Earth in fact is represented by green leaves on an orangey ground.
The relevant pip symbol is represented across the suits always using the same layout of symbols on the card…for example, all the 10’s are laid out to show the Sephirah on the Tree of Life.
Some of the Majors have been renamed…the Hierophant becomes the High Priest, Death becomes rebirth, and interestingly, the Devil becomes Deliverance. A few of the cards use recognisable traditional symbol – but most don’t. And some of the imagery is rather obscure to this particular taroist. I can just about ‘get’ the logic of using a red and green yin/yang symbol for the Magician….this reflects the total harmony which is the eternal goal of every dedicated occultist. Even, at a stretch, can I figure out that the pyramid with two palm trees growing out of it and a hot sun overhead reflects the Empress’ ability to bring fertility in even the most arid of deserts. But why is the Hermit an orange globe against darkness…oh…hang on…could this be the light of his lamp maybe?