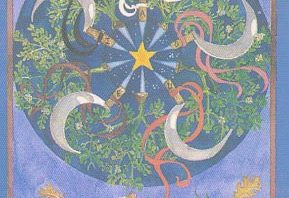 The Wheel of Change Tarot has beautifully painted, imaginative and colourful artwork on its 78 cards. It has multi-cultural, multi-ethnic, and modern imagery with an emphasis on nature and the natural world. It uses the Thoth tradition as a jumping-off point for the majors, though the minors are a more original system.
The “Wheel of Change Tarot” by Alexandra Genetti will be available again soon. We had expected to have the new card sets in October but it appears that it will be in the second half of November. The 78 paintings were begun in summer 1987, and ten years later the project was released by Inner Traditions/Bear of Vermont. Their boxed set featured the original deck as well as a 366 page book, including details of the symbolism in the cards and many historical insights into the Tarot and its relation to humanity and the natural world. After 12,000 sets were sold in two printings, the rights were returned to Alexandra in 2013. We will be re-releasing the deck and book separately in a self-published edition. The cards will be on higher quality cardstock than the original, and the “Color Wheel Card” will be featured on the back of each card (this was the original idea, but instead it was previously included as a 79th card in the deck). The book will be available as a Print-On-Demand printed version, and also as an e-Book. We will have a completely new website as well. Thanks for your patience.