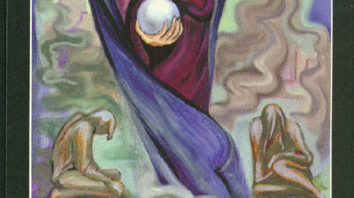 The TAROT OF AQUARIUS ERA it’s the creation of Maria Bulgarchuk and it was published in 1998. It is a lovely deck that follows traditional Tarot themes. The cards are bordered in black and are numbered 0 through 77. The name of each card is presented in a banner at the bottom of the image. The names are printed in English, Russian, and French.
The cards are simple enough that a beginner could use them, especially since the deck is similar to the Rider-Waite structure. In this deck, however, Justice is numbered 8 with Strength as 11. Wands are named Rods. (pyroskin.com)