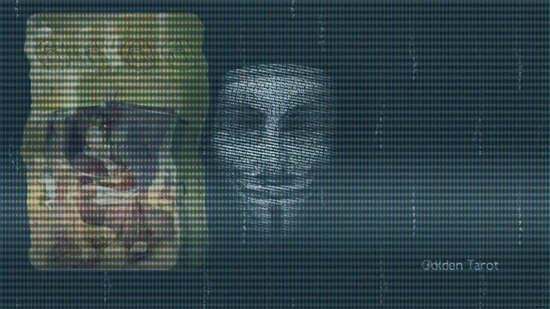 In the Tarot, the Four of Pentacles is often depicted as a person clutching a pentacle tightly to their chest. The pentacle, a five-pointed star within a circle, is a symbol of the element of Earth and material possessions.
Pentacles are also called Coins or Disks and are the equivalent of the Tiles, Bells and Diamonds from playing cards.
The Four of Pentacles are associated with security, stability, and material wealth. It can indicate that the person receiving the reading is clinging to their possessions and resources, perhaps out of fear of loss or a desire for control. Alternatively, it can suggest that the querent is experiencing financial stability and security and is willing to hold onto their resources to maintain this stability.
The Four of Pentacles can also symbolise a reluctance to let go or share one’s resources. This can be interpreted as a sign of generosity, as the person may look out for their own well-being by protecting their resources. On the other hand, it can also indicate stinginess or reluctance to be open-handed with others.
Overall, the Four of Pentacles suggests a focus on material possessions and a desire for security and stability. It can indicate either a fear of loss or a sense of abundance and prosperity. How the card is interpreted will depend on the context of the reading and the surrounding cards.

This text was generated with the help of an Artificial Intelligence program. More and more such free programs, at least for now, offer solutions for generating text and images that want to be creative and coherent. Such a program can scan a database and access the internet to add new information to the database and thus generate the desired material. Personally, though, I wouldn’t call it creative because it does nothing but compile existing information without adding original content to it.
The problem with this information gleaned from the internet is that despite appearances and common belief, the internet doesn’t have the answer to everything and anything. Then, in order to receive a valid response, it is necessary to know how to formulate the appropriate question. And finally, the internet doesn’t have all the correct answers. Many of the answers you find will only be “politically correct, ideologically correct, or what is more recently trendy, gender-wise correct.” Unfortunately, many of these so-called correct answers do not necessarily reflect reality and are true.
On the other hand, all this technological progress makes things simpler, easier, more accessible and facile. It is an idea that comes up increasingly insistently, according to which learning is a waste of time. With the help of a smartphone and access to the internet, we can find out any information within seconds.
The problem is that if we don’t know anything, we won’t be able to discern correct or at least possible information and something false, unrealistic or even abruptly impossible. And the more we sink into an illusory world built of chimaeras, the harder it will be for us to discern and find the way out, coming back from the abyss of confusion and stupidity.
Most people still don’t understand that behind these seemingly free facilities lie a host of other hidden interests. Nothing is ever free. Whenever we scroll through Google’s terms and conditions of the user agreement or any other apps or social platforms, we give up substantial chunks of our privacy and open the door to vital information about our private lives and future abuses.
Another severe blow to our learning process was replacing books with so-called documentary movies. Many of these productions are simple propaganda materials containing doubtful, altered, twisted, inaccurate and incomplete information. Without a solid general culture and a substantial knowledge base, it is virtually impossible to discern truth and falsehood.

However, returning to Artificial Intelligence, the greatest danger it represents is not the fact that by perfecting itself at a much faster pace than humans can do, we risk that at some point it will take our place, but the fact that they will think instead of ourselves, and in some cases, they will make decisions for us. Our escapism and the native tendency of passing the responsibility, even if it seems like another facility, in reality, it is not. With every decision we derogate, we make it harder to make our next decisions and diminish our ability to make the right decisions.
As for thinking, the point of school is not to make us memorise apparently or effectively useless things but to teach us the thinking process and to learn to handle, analyse and synthesise data. With the systematic destruction of the educational system and the implementation of new and “easy” to-use technologies, man will be less and less able to think efficiently and operate with data and information regardless of its quality.
Looking at things from another perspective, it is not Artificial Intelligence that is our greatest enemy, but ourselves. After all, AI didn’t create itself and won’t destroy us on its own.

Regarding the Four of Disks, find otherwise inaccessible information in my new book: Introducing the Unified Esoteric System and Tarot, available exclusively on Lulu. You can find the link in the description of this video.
Introducing the Unified Esoteric System and Tarot is probably the most critical esoteric and Tarot book published in the past two-thousand years. It contains information from three decades of practice, study and research, but most significantly, it is obtained by thinking and rational criticism. No AI application is or will ever be capable of producing such a result.