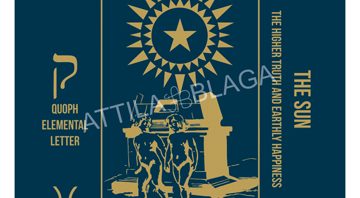 Divination:
Pisces is the Latin word for “Fish”. It is one of the earliest zodiac signs on record, with the two fish appearing as far back as c. 2300 BC on an Egyptian coffin lid.
Divine associations with Pisces include the Sumerian goddess Inanna, Poseidon/Neptune, Aphrodite, Eros, Typhon, Vishnu and Christ. 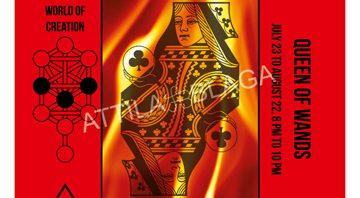 Divination:
Queen of Wands – Leo (Fixed/Fire).
The Queen of Wands embodies the three facets of Wands in Leo, respectively the qualities of the Five, Six and Seven of Wands.
Upright: self-reliant, courageous, passionate and lustful.
Reversed: egocentric, intolerant, arrogant and lazy. 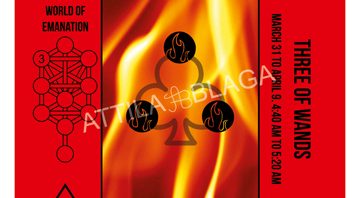 Divination:
Three of Wands – Sun in the second Aries.
Upright: Sun in Aries signifies initiative and leadership. Three of Wands is about the courage of going to the next level, facing bigger challenges, taking charge and making bold decisions to achieve great things.
Reversed: hastiness, harshness, rudeness, lack of planning and taking, sometimes unnecessary, risks. 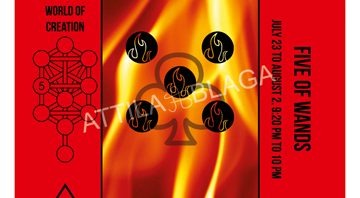 Divination:
Five of Wands – Saturn in the first decan of Leo.
Upright: Five of Wands is craving for recognition, wants to prove themselves and be at charge. Although they have a lot of qualities, sometimes they find it difficult to express themselves and especially to speak openly about their feelings. They are very disciplined, conservative, restrictive, cautious and even over-cautious and combined with the lack of spontaneity makes them difficult people to work or live with and can alienate others. Their strong will and determination can make them politicians or leaders.
Reversed: bossy, egocentric, restrictive and rigid. 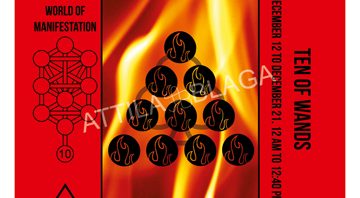 Divination:
Ten of Wands – Saturn in the third decan of Sagittarius.
Upright: Ten of Wands is a card of justice, education, religion, and taking things seriously. They are highly principled, believing that people should earn their achievements only through hard and honest work. The Ten of Wands are conservatives and desperately resist changes. They are especially narrow-minded when it comes to philosophy or religion. They will prefer logic and facts over poetry. Although, generally speaking, they are authoritarian and law-abiding people, sometimes they will create their own rules.
Reversed: dishonest, careless, rebellious and cynical.